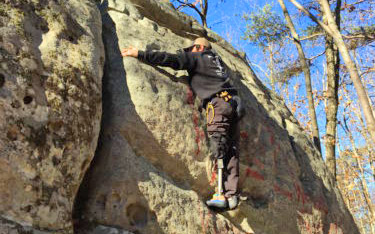 When Dave Klar lost his leg above the knee in August 2014, he feared that he had lost everything. Dave was working as an apprentice electrician at the time of the accident, and was unable to return to the job. He was also passionate about the outdoors, and heavily involved in BMX biking. The thought of losing the ability to participate in the things he loved was

devastating. Depressed, broke and scared, he searched the internet for support and guidance. That’s where he found Steve Chamberland, founder and president of 50legs.org, a non-profit organization dedicated to helping amputees in need. Dave reached out to Steve and within a matter of weeks, arrangements were made to bring him from Ohio to POA in Orlando to be fit with a prosthetic leg that would allow him to get back to his active life.

Once he was back up on two legs, things changed quickly for Dave. He had hope again. He dedicated his time and energy to rehab and giving back to the 50Legs organization that he felt had given him his life back. Dave went on camping trips with his dog, pushing himself to the limits.

During Dave’s next trip to POA, Ronnie Dickson, CP, a world-class above knee amputee climber, introduced him to climbing. He really connected with the sport, and soon was exploring the outdoors again, looking for new challenges. During this time he saw a post on 50Legs facebook page that was of interest to him. It was about

Jeff Bryan, a below-knee amputee fireman and avid climber who lives in Colorado. Jeff had contacted 50Legs for help in finding a source to make him a better fitting prosthesis, and they flew him out to POA. Jeff, a big time outdoor sportsman, returned home with a leg to wear for duty at the fire department and another for pursuing his sports interests, one of which happens to be ice climbing. Dave was intrigued by the photos Jeff posted on the 50legs page, and expressed an interest in trying it. The two of them started communicating and soon Dave was on his way to Colorado where Jeff showed him the ropes. That opened up a whole new world to Dave.

Last weekend, Dave met Ronnie in Tennessee and learned to do some bouldering (see video below). Strong and confident, Dave has come full circle since the accident that took his leg over two years ago. Although he still struggles in many aspects of his life, in many ways he is stronger and much more appreciative of all its possibilities.

In a recent Facebook post, Dave reflected on his life over the past few years: “As 2 years pass after my traumatic amputation from a #motorcycle accident that was no fault of my own, I think about what I may want. After riding to Yellowstone national park on my motorcycle back in 2010 I thought man I gotta get off the road and hike! So I started doing just that. Hiking as an amputee to me is pretty difficult but it’s doable. It’s nice to have people who support me that walk in the same shoe as me so to speak haha. When you fall you get up and do it again!” #noboundaries

7-year-old POA Orlando client Katie Eddington made the news twice this week; first in her home state of Kentucky and then on CNN national news! This pint-size dynamo made the decision to amputate her leg last December, and has never looked back! During her most recent visit to POA we fit her with a running prosthesis with a special blade, and now Katie is training to run a 5K. Run like the wind, Katie!   #POAproud #NoBoundaries

POA clients Scout Basset, April Holmes, and Regas Woods are going to be representing #TeamUSA at the 2016 Paralympic Games in rio de janeiro, Brazil! Marko Cheseto will be there as well, representing his home country of Kenya. We could not be more proud of these world class athletes, and look forward to cheering them on! 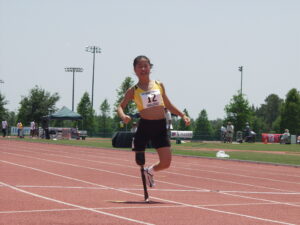 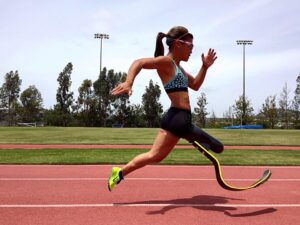 At POA, your Success is our Passion. We specialize in engineering and fitting high-performance, high-technology prostheses. Whatever your goals may be, our team of professionals have one focus: to provide you with a prosthesis that will allow you to achieve them. #NoBoundaries

Richard Browne won 2 Gold medals and 1 silver at the 2015 IPC Athletics World Championships held in Doha, Qatar, setting world records in two events.  We are excited to be part of Richard’s team, and look forward to getting him ready for the 2016 Paralympic Games in Rio!   Read more about Richard, who became a below knee amputee in 2010, and his triumph over tragedy in the Client Stories section of our website:  Richard Browne, BK #NoBoundaries

We love working with our clients and helping them take back their abilities – or learn new ones! ‪#‎POAproud‬ ‪#‎NoBoundaries‬ ‪#‎POAclientsRock‬

Scout Bassett, Taking Her Game to a New Level

Scout tried out her new sprinting leg set-up for the first time at a local track. Learning how to run with a knee is a whole different technique, and although it's going to take some time to master, she's off to an amazing start! #NoFear #RoadToRio #WhateverItTakes

Sending out congratulations to our POA client athletes Scout Bassett, Richard Browne, and April Holmes. All 3 of them made it to the finals in the 2015 IPC Athletics World Championships held in Doha, Qatar last week. Richard Browne won 2 Gold and 1 Silver, and set world records in two events! We’re beyond proud of you all! ‪#‎TeamUSA‬ ‪#‎POAproud‬