Following is a link to an interview with Shawnie Whitaker at ISA World Adaptive Surfing Championships! ‪Another POA client, Evan Strong, is also competing at this event.  http://fox5sandiego.com/2015/09/24/san-diego-hosts-worlds-first-adaptive-surfing-championships/ 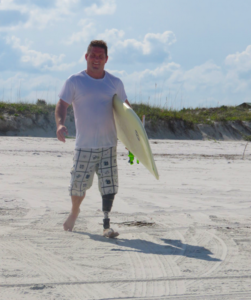 The largest-ever Paratriathlon took place at the Dextro Energy Triathlon ITU World Championship Budapest Grand Final, with 85 athletes representing 15 countries taking part. World Champions were crowned in all six Paratriathlon categories, as athletes battled through rainy and cold early morning conditions in the… Hungarian capital. Athletes completed a Sprint-distance triathlon, consisting of a 750-meter swim in the River Danube, a 20K bike along the banks of the River and a 5K run around some of Budapest’s most iconic landmarks.

Scout has been a POA patient since 1999.